You’ve got a mighty seductive flair; anyone could be swept off their feet today, so we encourage you to slowly put your feet on the brake to avoid hitting a wall hard face-first.

Your partner could give you some free-range, but make sure the only boiling and burning that goes on is at your own home; otherwise, you could be mistaking that free-range for full-fledged single freedom.

This Saturday you’ll get a chance to do something that gives you temporary bliss, but later on, it could be the prequel to arguments and misunderstandings aplenty. Therefore, tread carefully!

Have some time to think about the cold hard facts, and whether you’re better off taking that road, or closing the door to temptation, never to open it again.

On this halfway point for February, you could be getting some extra money (although it won’t be too much). You’re the one who should know whether to use it to cover up cracks or get something nice for the whole family.

If you want to go on holiday on your next off-time period (or maybe even a future honeymoon, why not!), you’ll manage to find great deals at reasonable prices. Our advice here at the Magic Horoscope is to go wherever you want to go and to avoid being influenced by everyone else’s choices.

Sometimes you get to know more foreign countries than places near your hometown, as if the only way to enjoy yourself was to fly away instead of just take a few steps along the main road.

Use the weekend to take care of your body and have meals and drinks that cleanse your body a little; you can have some detox tea and eat fibre-rich fruit, such as kiwi or pineapple, which promote bowel movements.

In the same way, drink as much water as you can and you’ll help your kidneys do some work because they’ll be more sensitive or weaker than usual. 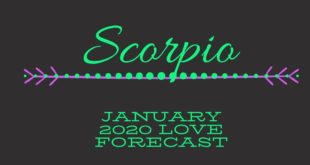 Scorpio January Love Forecast: They love you , BUT…..